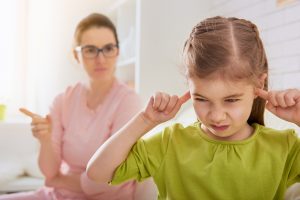 How do you know whether you’re experiencing an ‘extinction burst’ or if your child’s behavior is just getting worse?

What is an Extinction Burst?

To understand what I mean by this, I’ll give an example. If your child is hitting when asked to do something and the hitting is ignored but they still have to do the demand, a child won’t stop the behavior straight away; in fact it will get worse. Why?

Because it used to work for them! This is called an extinction burst.

When you start to ignore the behavior all together they will up the ante and try to go back to the way it was before. Because that was easier for them than listening to you.

This doesn’t make your child a bad person in any way; in fact it makes them pretty smart! They’ve figured out how get want they want in the world, and it’s wonderful they can problem solve like this. Increasing the bad behavior is actually a clever thing to do. If you did something one way, and it worked, you would keep doing more of it to get the same reaction too!

When a behavior is done for attention, and we ignore the behavior it will get worse. But then it will start to get better, because your child will realize this is just too much work. Great!

But what happens if it stays the same? And doesn’t get better at all? When do you draw the line in the sand and try a new tactic?

What if an intervention isn’t working?

–        Changing the length of time they ignore the behavior/child

–        Have someone else also back up the intervention

If you feel a part of therapy isn’t working for your child, you can always speak to your therapist about it. They will have the data and charts to confirm or deny your experiences. They should work with you, not against you, to help your child better function, learn more and live a more productive life.

Contact us to find out more about our services.

We specialize in autism analysis and behavior development.

ABA, Behavioral Therapy involves anything that can be seen and heard. Therefore all behaviors have achievable and noticeable goals, which are measured and constantly re-measured throughout time to focus on our progress as well as whether the goals are being reached.

The great and unique thing about ABA therapy is that the plans are individualized to fit your child's needs. Since Autism is a spectrum, that means no two cases are exactly alike. Therefore the best treatment for autism would be customized to fit your child and your family's needs after an assessment is made.

Staff need to be competent by being trained by a Board Certified Behavior Analyst on behavior analytic procedures as well as intervention strategies. Courses are available on various topics and custom fit for your organization or situation for effective ABA autism therapy. Help your staff find out what is autism and how to best treat autism.